LED lights are following the incandescent, fluorescent and energy-saving lamps A new light source, with high luminous efficiency, but the spectral characteristics of the light-emitting principle and a lot of people do not understand it, they will be worried that it will not damage the light emitted eyes. From the spectrum, the light from the LED emitted light and traditional incandescent and fluorescent light emitted is very different, so-called “spectrum” refers to objects made of light corresponds to a “rainbow.” 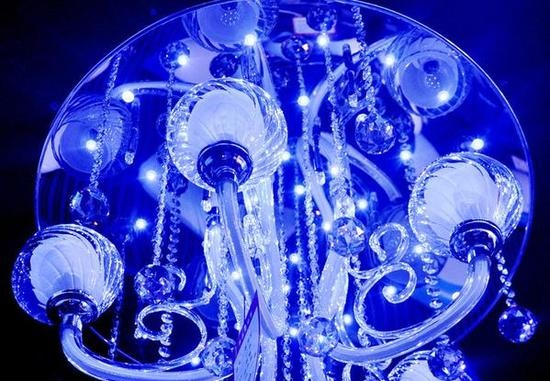 Three-color LED
The traditional incandescent, fluorescent light and sunlight hair as having “red, orange yellow green blue purple” seven colors.
However, the general LED emitted light only “RGB” three colors, wherein R is red, showing red; G represents green, is green; and B represents blue, is blue.
These three colors LED, to 400nm to 500nm between “blue LED” most important and most basic.

Blu-ray where?
Look above this “rainbow” drawing. From left to right, followed by the ultraviolet, visible and infrared. Wherein the visible light wavelength range between 400 nm to 700 nm, and 400 nm from the beginning to the wavelength range of 500 nm is blue, so the band is called blue.
The basic unit of light, called photons, photon wavelength is inversely proportional to frequency, the blue wave length, so high frequencies. Calculated according to Einstein and Planck’s quantum energy equation, we can know the photon energy equal to Planck’s constant multiplied by the frequency of the photon, the photon energy of blue than red and green light is higher, which so that we can use blue to “inspire” the other colors of light, such as yellow on blue can be “inspired” them.

White LED is how white light?
So, the kind of home is how to produce white light LED white light it? Already mentioned above, the Blu-ray photon energy is high, so use it to excite fluorescence. (Similar to the principle of fluorescent, fluorescent light is emitted to the ultraviolet rays hit the fluorescent tube wall phosphor) Blu-ray generated by the LED generally used to play in the phosphor to produce yellow. After the yellow was inspired by the blue, they come together emitted from the LED, we would feel like to see the white, blue and yellow in fact, this is only two colors mixed together composite light only.
We make an example, Blu-ray is the “mother”, while yellow is “son”, they are mother and son groups constitute the “white” of the single-parent families.
Because of this principle, so many manufacturers in order to improve the brightness of white LED directly improve the strength of the blue, this yellow will be a corresponding increase in the brightness of the final form of white light will increase, but it will cause us to be in the paper Interpretation of the “Blu-ray excess” problem.

Actual measurements of the spectrum of LED lights
The figure is the different types of white LED spectrum measured curves, we can see the “blue” 400nm to 500nm between a strong peak.
This shows that the hair looks white LED, but in fact it does contain a spectrum in a strong blue component.

Effect of blue light on the retina
Well, since the blue LED is white “mother”, the blue eyes and the feeling of what it is?

The human eye tissue for receiving light is called the retina, if the light source of high brightness blue band 400-500 nm, may cause retinal photochemical damage the eyes for a long time after the light source directly. This damage can be divided into two categories: direct visual injuried blue visual pigment in photoreceptor cells and the resulting reaction, and Blu-ray reaction with retinal pigment epithelium lipofuscin cells triggered. These photochemical reactions produce large amounts of free radicals are cytotoxic, destroy normal retinal cells grow and work.
We can also change the point of view of the dangers of blue. Why the human eye can not accept the “excess blue” blue LED emits it? Because humans are evolved in the solar system, according to Wien’s displacement law of blackbody radiation, we can sun’s surface temperature is calculated central wavelength of sunlight at about 550 nm, while the blue LED center wavelength is 465nm, it deviated from the sun the center wavelength of light, so from an evolutionary perspective, our human eyes can not accept the “excess” Blu-ray.

Life in excess of blue LED testing standards
In general, regular factory products through national quality inspection market, there will be no blue excess risk. But there are some LED lights manufacturers do not pay attention to control the intensity of the blue, they produce LED lamps in blue is “excessive” the existence of the Blu-ray radiation damage to the eyes.
Life, light source can emit blue light has a lot – Yuba, flat panel displays, LED neon lights, fluorescent lamps, liquid crystal displays, ipad, large-screen mobile phones have background light, they all contain shortwave blue light. If Blu-ray is “excessive”, it will affect the retina, so should be avoided eye contact with the light source, and pay attention to the use of time, close their eyes a rest every 20-30 minutes.
If you are worried about the presence of “Blu-ray excess” issue purchase LED lights or other electrical appliances, according to “People’s Republic of China National Standard GB / T 20145-2006 / CIE S 009 / E: 2002 (photobiological safety of lamps and lamp systems ) “to determine the LED light blue is not excessive – gives the upper limit of the standard blue in particular spatial angle of flux. (Specific standard content tadpole monarch no longer listed in detail here, interested readers can go to view.)
However, the market for the sale of LED lights, LED blue overdose is how to judge a complex issue. For example, the figure below, this LED lamp from its published “voltage and frequency” is unable to calculate whether excess blue, because the voltage and frequency of the electrical indicator, while the Blu-ray is an optical indicators. And it declared “flux” is an optical indicator, but only the total luminous flux of white light, instead of the blue flux, so the average consumer is difficult to judge this light is not an excess of blue.
In the Eye eye point of view, I suggest that you buy when the blue LED lights for low intensity lamps. Qualified people can get spectrometer measured at the spectrum of light emitted by the LED light – if the intensity of this blue LED lamps emit stronger than a lot of sunlight in blue, do not buy it.