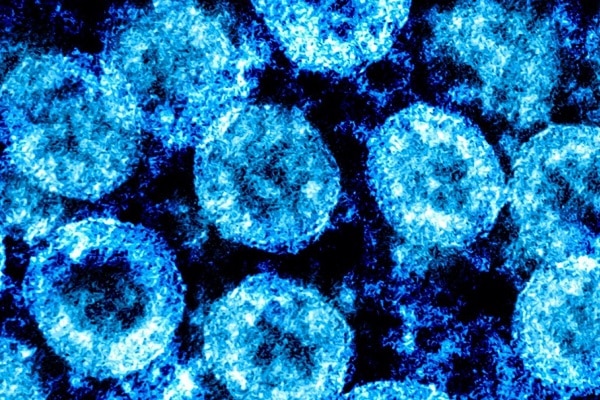 More than 99.9% of seasonal coronaviruses present in airborne droplets were killed when exposed to a particular wavelength of ultraviolet light that is safe to use around humans, a new study at Columbia University Irving Medical Center has found. 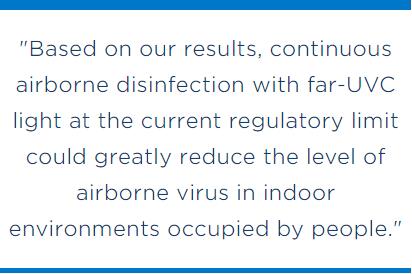 “Based on our results, continuous airborne disinfection with far-UVC light at the current regulatory limit could greatly reduce the level of airborne virus in indoor environments occupied by people,” says the study’s lead author David Brenner, PhD, Higgins Professor of Radiation Biophysics at Columbia University Vagelos College of Physicians and Surgeons and director of the Center for Radiological Research at Columbia University Irving Medical Center.

The research was published today in Scientific Reports.

Conventional germicidal UVC light (254 nm wavelength) can be used to disinfect unoccupied spaces such as empty hospital rooms or empty subway cars, but direct exposure to these conventional UV lamps is not possible in occupied public spaces, as this could be a health hazard.

To continuously and safely disinfect occupied indoor areas, researchers at Columbia University Irving Medical Center have been investigating far-UVC light  (222 nm wavelength). Far-UVC light cannot penetrate the tear layer of the eye or the outer dead-cell layer of skin and so it cannot reach or damage living cells in the body.

The new paper extends their research to seasonal coronaviruses, which are structurally similar to the SARS-CoV-2 virus that causes COVID-19. 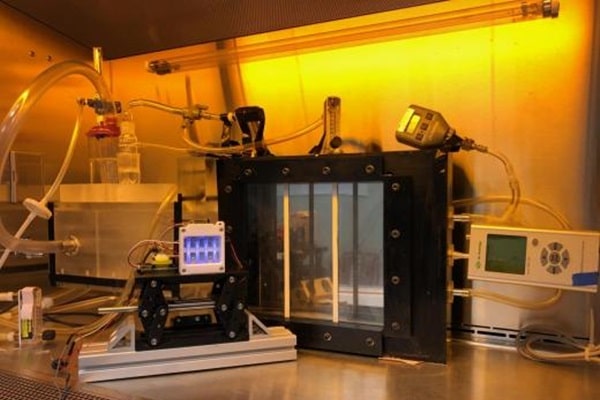 In the study, the researchers used a misting device to aerosolize two common coronaviruses.  The aerosols containing coronavirus were then flowed through the air in front of a far-UVC lamp. After exposure to far-UVC light, the researchers tested to see how many of the viruses were still alive.

The researchers found that more than 99.9% of the exposed virus had been killed by a very low exposure to far-UVC light.

The sensitivity of the coronaviruses to far-UVC light suggests that it may be feasible and safe to use overhead far-UVC lamps in occupied indoor public places to markedly reduce the risk of person-to-person transmission of coronaviruses, as well as other viruses such as influenza.

In a separate ongoing study, the researchers are testing the efficacy of far-UVC light against airborne SARS-CoV-2. Preliminary data suggest that far-UVC light is just as effective at killing SARS-CoV-2.

“Far-UVC light doesn’t really discriminate between coronavirus types, so we expected that it would kill SARS-CoV-2 in just the same way,” Brenner says. “Since SARS-CoV-2 is largely spread via droplets and aerosols that are coughed and sneezed into the air, it’s important to have a tool that can safely inactivate the virus while it’s in the air, particularly while people are around.

“Because it’s safe to use in occupied spaces like hospitals, buses, planes, trains, train stations, schools, restaurants, offices, theaters, gyms, and anywhere that people gather indoors, far-UVC light could be used in combination with other measures, like wearing face masks and washing hands, to limit the transmission of SARS-CoV-2 and other viruses.”

The other authors (all CUIMC) are Manuela Buonnano, David Welch, and Igor Shuryak.

The authors declare that the Trustees of Columbia University in the City of New York have a pending patent on the technology: “Apparatus, method and system for selectively affecting and/or killing a virus.”

The authors declare no additional financial or other conflicts of interest.