NASA is equipping its latest VIPER lunar probe with two LED flood lights, similar to those used in dark night environments that might be installed on trucks or SUVs. These floodlights will be used to illuminate the darkest parts of the moon, enabling the VIPER lunar probe to find water in places that are difficult to see. NASA showed off one of the floodlight prototypes before the mission. 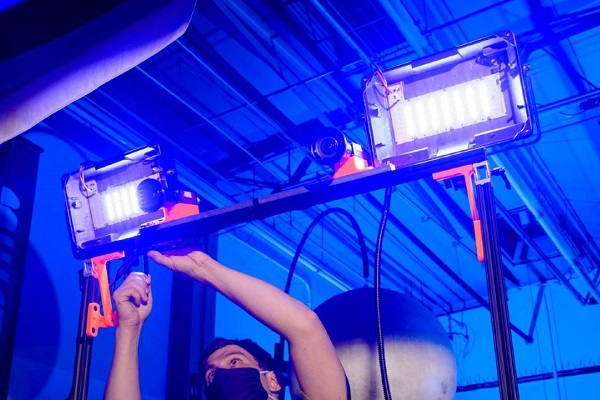 NASA explained that the VIPER team has been testing various LED lighting systems designed to be used in the coldest and darkest places on the moon, which will be necessary for the lunar rover to navigate places where it is basically invisible.

As part of this work, they are exploring different wavelengths, including the bright blue LED flood lights shown in test images recently shared by NASA. These lights need to provide the best working condition for VIPER’s optical system, including various cameras installed on the detector. These cameras will help it navigate around the boulders and avoid falling into deep craters on the moon.

This work is currently being carried out at NASA’s Ames Research Center, but these research results will eventually be transferred to researchers at the Johnson Space Center, which will be where the LED floodlights for the lunar rover will be manufactured. According to NASA, this will be the first time that an LED lighting system has been deployed on a lunar rover. NASA has also created a high-quality lunar surface simulation for testing.

In the end, these LED flood lights will be a necessary component, including LED arrays and light adjustments similar to those on cars (far and low beam lights, etc.). A rover can use up to 6 LED lights, and will be able to individually control each light according to current needs.