Take you to know more about stadium lighting

The importance of stadium lighting

For a modern stadium, it is not only required to have a beautiful appearance and complete equipment for various sports, but also to have a good lighting environment, that is, to have suitable and uniform illumination and brightness, ideal light color, and three-dimensional lighting. Glare, etc. In addition to ensuring a good viewing effect for the audience, it must also ensure the lighting requirements required by the referees, athletes and competition items, as well as a good TV broadcast effect. Therefore, good lighting plays an important role in modern stadiums. 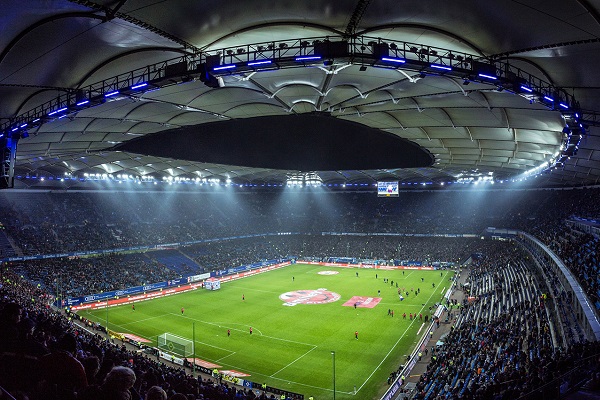 Generally speaking, in the lighting design of a stadium, the following three factors should be considered:

1) Meet the visual requirements of athletes during sports competitions, and minimize the objective impact of lighting on the competition;

2) Meet the visual requirements of the audience and minimize the discomfort caused by the lights when watching the game;

3) Satisfy the lighting requirements of TV broadcasting and improve the broadcasting quality as much as possible; 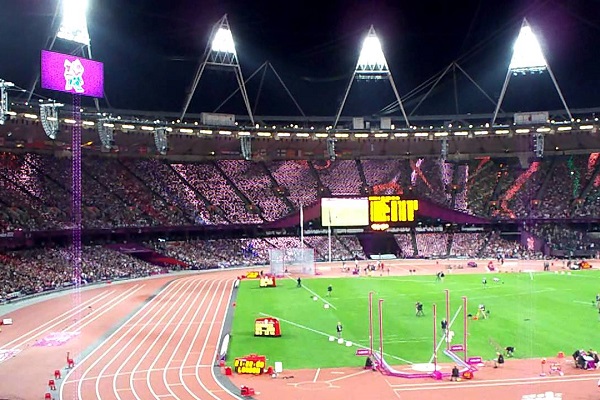 2) According to Article 2.2.9-2 of “Lighting Design Standards for Civil Buildings” GBJ133-90:
Vertical illuminance required for TV broadcasting: The maximum shooting distance is divided into three groups.

3) The above-mentioned illuminance refers to the final average illuminance of the stadium. The initial illuminance selected in the design must be included in the maintenance factor, generally a value of 0.7-0.8 can be used.

In addition to providing sufficient horizontal and vertical illumination, the key to sports lighting is to reduce glare to achieve a bright and glare-free effect. Glare is one of the most important factors affecting lighting quality. According to the CIE NO.83 publication “Sports Field Lighting for Television Systems”, the maximum glare index GRmax in the field should be less than 50, and the smaller the glare rating, the better the glare limit.

The glare rating GR is calculated by the following formula:
GR=27+24Lg*Lvl/Lve 0.9

3) The directionality of light

The depression angle of the lamps not only affects the vertical illuminance, but also may have a greater glare effect on athletes, spectators and referees. The lighting design of the stadium should choose the aiming direction of the lamps. In addition, the proportion of light coming from the main camera and the other side should be controlled within a certain range, and the most important point of lighting is to be set in the center of the football field and in the restricted area.

Lighting energy saving focuses on adopting reasonable lighting schemes and efficient lighting devices, reducing line loss and good lighting control. Sports buildings are construction projects that consume a large amount of electricity for lighting. In the sense of energy saving, only comparing the initial investment cost without selecting the lighting design based on the minimum operating cost is not a reasonable design. Investment and operating costs are considered comprehensively.

High-efficiency LED light sources and lamps should be selected to improve the power factor of the system. The lighting design should have a variety of lighting modes and corresponding control schemes. The number of lamps can be adjusted to provide suitable lighting for different competitions and activities. The control scheme should be simple, practical and flexible.

There are usually three methods for illuminance calculation of stadium lighting design:

One is the estimation method of capacity per unit area;

The third is the point-by-point calculation method, which can accurately calculate the illuminance of a certain point.

Four lighthouses are set up at the four corners of the site, the height of the towers is generally 25-50m, and narrow beam lamps are commonly used. This type of arrangement is suitable for football fields without a running track, with low utilization rate of lighting, difficult maintenance and repair, and high cost. If the lighting quality is not too demanding, it can meet the general requirements of athletes and spectators. The appropriate position of the lighthouse can form a suitable illumination distribution on the field by aiming at the stadium lights with various beam angles. But today’s television broadcasts require high and uniform vertical illuminance, which requires that the angle of light incident on the farther part of the venue is much smaller than the specified limit. The effects of the higher brightness obtained with the use of large gas discharge lamps, combined with the traditional tower height, made it inevitable to generate excessive glare. The disadvantage of this four-tarpaulin form is that the visual changes in different viewing directions are large and the shadow is deep. From the perspective of TV broadcast, it is more difficult to meet the vertical illuminance in all directions and control the glare well. In order to meet the requirements of Ev/Eh 44 value and less glare, it is necessary to take some improvement measures for the four-tower lighting method:

1) Move the position of the four towers to the sides and outside the sideline, so that the opposite and four corners of the venue can obtain a certain vertical illumination;

2) Increase the number of stadium lights on the lighthouse on the side of the TV main camera to enhance beam projection;

3) Supplement the light strip lighting on the top of the stand on the side of the TV main camera direction, and pay attention to controlling the glare, so that the audience at both ends of the venue should not notice it.

This form of lighting is set with low lighthouses (or light poles) on both sides of the field, which is suitable for practice fields, such as football, volleyball, tennis courts, etc. Its outstanding advantages are that the electricity consumption is relatively low, and the vertical illumination and horizontal illumination are better. Due to the lower light pole, this arrangement also has the advantages of low investment and convenient maintenance.

The light poles should be arranged evenly, 6 towers or 8 towers can be arranged, the height of the light poles should not be less than 12m, the projection angle should be between l50-250, the maximum projection angle to the sideline of the venue should not exceed 750, and the minimum should not be less than 450. Generally, medium beam and wide beam stadium lights are used. If there are spectator stands, the arrangement of aiming points should be very careful. The disadvantage of this kind of lighting is that when the light pole is arranged between the venue and the auditorium, it will block the audience’s sight and eliminate the shadow. In football fields without TV broadcast, the lateral arrangement of lighting devices mostly adopts the multi-tower arrangement instead of the light strip arrangement. The lighthouses are usually arranged on the east and west sides of the arena. Generally speaking, the height of the lighthouses of the multi-tab lights can be lower than that of the four corners. There are four towers, six towers, eight towers and other layouts in the multi-tower arrangement. In order to avoid visual disturbance to the goalkeeper, the midpoint of the goal line is used as the reference point, and lighthouses cannot be placed within at least 10m on both sides of the bottom line.

Arrange the lamps in rows on both sides of the court to form a lighting system with continuous light strips. Its lighting uniformity, the brightness between the players and the court is better. At present, it is recognized in the world that this way of lighting is the best, and can meet the various requirements of TV broadcasts for lighting. The length of the light strip should exceed the goal line by more than 10m (for example, in a sports field with a runway, the length of the light strip should preferably not be less than 180m) to ensure that the goal area has sufficient vertical illumination from behind. At this time, the projection angle can be reduced to about 200. If a low-brightness lamp is used, it can be further reduced to about 150. Some stadium light strip lighting is very close to the side line of the field (the included angle is above 650), and the side of the field cannot obtain enough vertical illumination, so it is necessary to increase the “recessed” supplementary lighting.

In general, the light-belt arrangement uses a combination of several stadium lights with different beam angles. The narrow beam is used for long shots, and the medium beam is used for close shots. The disadvantage of the light-belt arrangement is that the glare control technology is relatively strict, and the object’s sense of reality is slightly worse.

Hybrid layout is a new lighting method that combines four or more towers layout with light strip layout. It is the best lighting technology and lighting effect for large-scale comprehensive stadiums in the world. The hybrid arrangement absorbs the advantages of various lighting methods to enhance the sense of reality, and the vertical illumination and uniformity of the four directions are more reasonable, but the degree of glare has increased. At this time, light poles or lighthouses are often not set independently, but are integrated with various parts of the building, so the cost is relatively low.