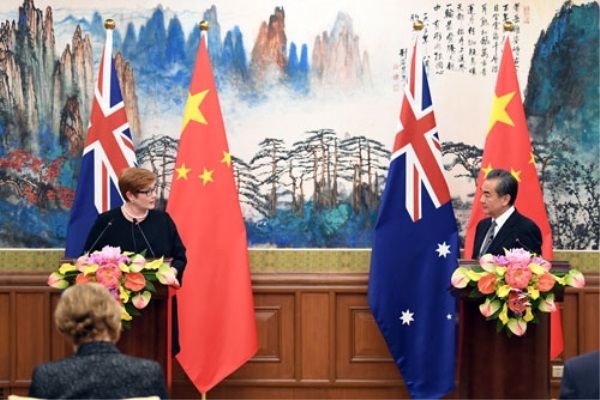 Both sides should unswervingly promote the improvement and development of China-Australia relations. The healthy, stable and sustainable China-Australia relations not only conform to the fundamental interests of the two peoples, but also are conducive to peace, stability and prosperity in the Asia-Pacific region. The Chinese side appreciates that leaders of the new Australian government have publicly stated that the Australian side regards China’s development as an opportunity rather than a threat, and is committed to developing a long-term and constructive partnership with the Chinese side.

China and Australia do not necessarily see eye to eye on every issue, but we should always match our words with deeds. It is believed that the Australian side will further translate the positive will to develop relations with China into practical actions and make it a common consensus among all circles of the Australian society, so as to earnestly reflect the true value of bilateral comprehensive strategic partnership.

Both sides should unswervingly safeguard free trade and opening up of the market. Both China and Australia are advocates and beneficiaries of free trade. In the past three years since the implementation of the China-Australia Free Trade Agreement, the two sides have always been cutting taxes again and again to each other. The final tax cut will be carried out on New Year’s Day in 2019, and by that time almost all goods will be subject to zero tariffs. Although the Chinese side runs a deficit in bilateral trade, China has never adopted unilateral and protectionist measures. Instead, China welcomes more high-quality Australian products to enter the Chinese market. At the same time, we also hope that the Australian side will provide a more open and fairer environment for China’s investment. We are willing to make joint efforts with the Australian side to make the cake of mutually beneficial cooperation bigger, safeguard the rules-based multilateral trading system, and jointly build an open world economy.

Both sides should unswervingly promote regional stability and prosperity. As China and Australia are in the same region, we are most aware of and care about the current situation in the region. Being committed to promoting the peaceful settlement of regional hotspot issues, both China and Australia are willing to strengthen communication and coordination in such regional mechanisms as the Asia-Pacific Economic Cooperation and East Asia Summit, focus on development and cooperation, and actively promote the process of regional economic integration. Both countries can fully cooperate on the issue of Pacific Island countries, and there is no zero-sum game between both countries. We are also willing to work with various countries in the region to promote the building of a new type of international relations featuring mutual respect, fairness, justice and win-win cooperation, and enhance mutual trust and cooperation among various countries, in a bid to jointly build a more peaceful, safe, prosperous and beautiful homeland.

The article was transferred from the official website of the Chinese Ministry of Foreign Affairs: https://www.fmprc.gov.cn/mfa_eng/zxxx_662805/t1612160.shtml